There are a number of different microphones that are used by YSTV. This page lists the several models and makes used, along with rough usage guides. Unless marked as condenser type microphones (meaning either phantom power or an internal battery is required for use), all the listed mics are dynamic (no need to worry about power).

Also known as a shotgun or rifle mic, the AT835b is a very directional condenser microphone primarily used at the end of a boom pole. Due to its extreme directionality, it can be used to pick up sounds at a reasonable distance without picking up background noise. This does mean however, that the mic must be pointed directly at the source (within 30 degrees either side is preferable) - it won't pick up anything if it's not. The AT835b can run from phantom power off a sound desk, or from a single AA battery - be sure to check the power if it's not working! The mic has a foam cover (windshield/screen) to reduce the noise caused by moving air rapidly striking the diaphragm (the bit that picks up sound - ask a techie if you can try blowing down a mic to hear the result). In general the windshield should always be used (certainly outdoors) as the mic is quite sensitive, but it may sometimes be possible to go without when inside with no air-con or open windows - desirable because the windshield will cause a slight reduction in the mic's high frequency response. If in doubt, it's probably best to use it.

Some specs for the AT835b are here.

Similar to the unidentified lavaliers below, but with a voltage divider circuit similar to the one from the grey box hastily crammed into the body of a male XLR connector to allow direct connection to phantom power. Supposed to run at 5V, but most run somewhere closer to 12V.

These are our primary lavalier/lapel/tie microphones. As with all lavaliers, mic placement is crucial when using them - too far from the subject's mouth and nothing will be picked up. Being cardioids, they should point up towards the wearer's face, and if it's expected that they'll only turn to one side they should if possible be placed on this side of the chest, to avoid big a big drop in volume when the wearer turns their head. Care has to also be taken to ensure the mic isn't touching the subject's throat or in a location that will cause hair or clothing to rub against it. Wearers must avoid touching it during broadcast/recording to prevent any nasty thumps from the sound op. To use one of these mics you'll need both a QL5 mic with clip and a PM6 adapter (silver canister) to convert the diddly mini XLR to normal sized XLR.

Some specs for the QL5 are here.

These are the hand-held mics with on-off switches. Useful for interviewing people in states of considerable intoxication, as it's (slightly) less of a disaster if they get dropped than one of the nicer SM58's. Remember to take a flag (YSTV-branded triangular prism that slots on to the mic body) and, if you want to use it outdoors, an external windshield.

Some specs for the E825S are here.

Often considered the best touring microphone in existence, the SM58's are arguably one of the only pieces of kit we have that are used regularly in professional environments. They are extremely robust - although please don't test exactly how robust. These are primarily used as handhelds or on a mic stand for vocals. Due to their cardioid pick-up pattern, they are subject to the proximity effect and can also be used fairly effectively to capture low frequency stuff like kick drums, bass guitar amps and cajons.

Some specs for the SM58 are here and a few notes about its bass response relative to proximity are on page 5 here.

Similar to the SM58 in design, the SM57 is a fairly robust cardioid microphone. Our most common use for it is for acoustic instruments (typically guitars, but with a peak at 6kHz they also do a fine job on snare drums and electric guitar amps on the odd occasion that this is necessary). Good with professionally trained singers (who can turn away slightly before plosives), but it's usually better to use a '58 (or even an E825S) for vocals, as they have more internal windshielding. The same goes for kick drums and cajons, which tend to shift a lot of air.

Some specs for the SM57 are here and a few usage suggestions and notes about its bass response relative to proximity are on page 5 here.

RODE NTG2s are short Rifle condenser microphones for boom and on camera operation. They have a relatively small pickup area at the end of the microphone in a cardioid pattern but more focused than a normal cardioid microphone. This directionality is what makes them perfect for booming (where the microphone is pointed at the subject to be sound recorded). We will normally use a boom out approach when on short film or recorded sets. The other common way in which we use the NTG2 (and all rifle microphones) is on camera, normally a C100. They make for difficult interview microphones but are good for getting situational directional audio from the camera both as scratch and background audio for a later mix.

They can be used in our studio setting as pickup mics, generally suspended above the subjects or in some other way pointed at them. They offer the ability to be at a stand off distance from the subject and still function as a good pickup which makes them useful.

They are best paired with the rifle mufflers that we have for them, especially in outdoors situations and the deadcat for very windy situations.

While they do require phantom power, NTG2s can also be powered from internal and changeable AA batteries which can allow for a decent backup option in the worst cases, but unless something is really broken with phantom power, use phantom power.

Our, ‘slightly’ off market pickup microphones. The Gatt MOH - 7s are cheap and not too great at their intended instrument pickup function, however they are very useful as cheap room tone microphones when used in an XY pair (see XY pairs). They don't deliver the best sound, with a lot of noise through vibration and a pretty flat sound profile. But, for room tone, they're very good.

Small enough to mount very discreetly, they provide a decent enough sound to work in the final mix to STRM. They generally are only used on OBs and are either mounted on a stand and pointed into the room / at the crowd or they’re bodged in some way which will allow the XY pair to pick up room tone.

The phrase 'cheap and cheerful' comes to mind.

The FP15/83 system is our main use wireless sound option for both OB and studio shows. When LAV microphones need to be used for a particular event or show, we tend to have problems and use the wired ones as a very last plan solution where nothing else is working. These wireless LAVs are far better quality and so we use these whenever the situation permits.

They're also useful for interviews when the microphone can be kept out of view as much as possible, remember to run the cable to the belt pack up the inside of the persons clothing.

The receiver range is fairly decent in most situations however, as with the Teradek, the range is compounded by a variety of factors which are important and common to OBs. These tend to be, number of people in the room and number of wifi signals / wireless signals in general within the vicinity of the transmitter / receiver. There is little that can be realistically done about this while on OB or while planning, so you should just remember that this factor will be at play.

On pane of assault by the technical enforcer, DO NOT put phantom power through the Shure kit when connected to a camera or a sound board. Doing this would blow the pack up and that's not good. 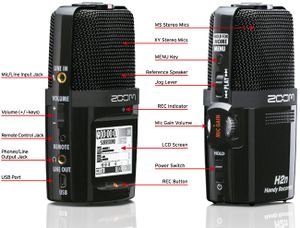 Upto 2014 Note this is for historical reasons only.

The ZOOM H2n is a microphone/recorder purchased in Summer 2013. YSTV had previously borrowed an H2n for Campus: A Tale of Terrors, which was filmed solely using D-SLR cameras, as external microphones recording directly to the D-SLRs result in noise. Film review show Front Row was also filmed using D-SLRs, as the Sony HVR-HD1000Es struggle to record in the low-light conditions of the cinema. Prior to the purchase of the H2n, a Sony HVR was brought along solely to record the rifle mic.

Due to numerous accidents and failures with the Sony cameras during 2013, they can no longer record to tape - hence making them unusable for pre-recorded content. This has led to increased use of D-SLRs in productions, meaning the H2n has rapidly become the de facto way of recording audio.

The H2n runs on two AA batteries, and records to an SD card. Recordings made to the card can be transferred to the edit PCs either by using an SD card reader, or by connecting a Mini-B type USB cable to the H2n. When using the H2n, be sure to keep an eye on the LCD screen - as this will tell you when the card is full, or when the batteries are flat. It is a good idea to check both of these before shooting.

The H2n also has both a line in and line out - this allows for other mics to be plugged into and recorded by the H2n and/or have the audio being recorded sent on to another device. The H2n was used like this for 4Four, with the H2n sitting between the DJ desk and streaming laptop. Both connections are stereo 3.5mm jack sockets, so bodge microphone cables may have to be used.

The H2n is basically not used any more as of about 2018 where it was replaced in a recording capacity by the 2 privately owned ZOOM H5s which typically float around the studio during productions. These are more functional than the H2n and nicer to use. That being said, the H2n does still exist and likely will come out of temporary retirement soon.

Using the H2n has a number of advantages over connecting the rifle mic directly to an HVR. The lack of cable between the microphone and camera means the boom operator has a lot more flexibility over where they stand - allowing better sound recording on wide or long shots. (Of course, one can use an extra XLR cable with the rifle mic to achieve the same result, but this is normally impractical.) Also, unlike the rifle mic, which is mono, the H2n is capable of recording sound in stereo, 2-channel and 4-channel surround.

The manual can be read here.

There are several 5 V lavalier microphones with 3.5mm TS jack connectors - these must be used with a certain big grey box that converts 48 V phantom power from the desk to the required 5 V. Any clips they once had are long gone, so they currently have mini bulldog clips taped to them.