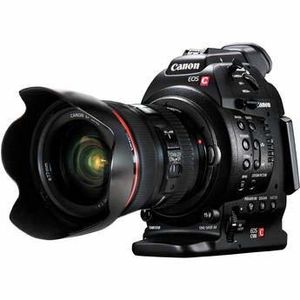 The Canon C100 is a camera that was bought with much of the remaining grant money in the 2016-17 in YSTV. It is our best current camera. Lying at the entry level of Canons C (cinema) line of cameras, it offers better functionality and quality compared to our AC90 cameras and has all but replaced some of their functions. As such, the C100 is normally used on recorded events and short films. It can occasionally be found at OB events which require more angles than we have AC90s. A second C100 is also often used within YSTV which is a personal camera of one of the members. The C100 is a somewhat modular camera; with a tall form factored brain, detachable top handle and side grip. 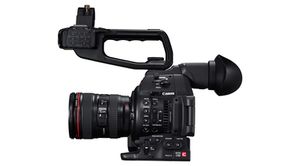 The side of the camera body which does not contain the grip attachment houses the main control button array. Here, as is fairly usual of video cameras, the main use case buttons are found. The main ones of note which you should become familiar with are; the Zebra (highlighting areas of the frame which are over exposed), waveform which shows the colour signal form for the frame, ISO, Shutter angle and the ND filter wheel. The ISO and shutter angle can both be adjusted using the screen and a joystick on the side grip so the choice generally comes down to personal preference. Additionally, the power control is also on this side of the camera. The top handle contains the XLR input controls and these are also on this side of the camera.

The XLR inputs are on the opposite side of the handle as is a record button. The side grip also has a record start stop button as does the front bottom right of the camera brain. The back side of the camera holds the camera playback buttons for review of footage and the connections for HDMI out, headphones and so on. Behind the screen on the back of the camera are the 2 SD card slots which are accessible by a flap cover. Below this is the battery slot, with the battery release button being below the screw adaptor for the side grip. The C100 takes batteries marked with a piece of green and yellow tape.

The top handle is connected by a fairly secure thread into the cold shoe of the brain, please ensure that it is tight before use and remains tight during use for the safety of the camera (and thus the safety of you :). For the same reason, ensure the top handle audio comp cable is lined up correctly with the port on the camera brain before attaching since the pins inside it are very delicate and damaged easily which is expensive to fix.

The C100 has been used on just about every single YSTV report, short film and misc scripted work since it's purchase as well as many live streams. It is normally paired with either the shoulder rig or a borrowed DJI Ronin for events and has taken several hits from various balls in its tenure so far.