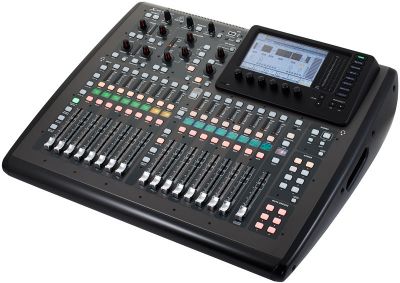 The x32 Compact (Alex west memorial sound board) is our brand new digital sound board. As it's name wouldn't suggest, it's actually a whole lot bigger than the Producer and offers a new set of functions which turn out very useful for OBs and keeping our sanity while operating. Bonus fact, when it arrived we believe that Edwin Barnes fell in love at first sight. Being a Behringer, it can take advantage of the same AES50 connections as the Producer and maintains much the same operational process of the Producer. Thus learning to use one board will more or less allow an operator to use either.

The X32 Compact was bought by chance around Easter of 2019. When York Vision folded, following scandal, it's remaining money was put up to be shared around the other York media groups. As part of this, YSTV put forwards a bit for enough money to buy a new sound board and some other small peripherals. The X32 Compact was chosen as a solid upgrade and accompaniment to the Producer. Our bid was successful, and the board showed up a few weeks later.

Named the Alex West Memorial Sound board, after the (of the time) leader of URY, due to his unhappiness about the decision to award some of the vision money to YSTV. The name was thought of after a media committee meeting, in the pub during a throw away comment by Andrew Waddle to Edwin Barnes. It is, of course, meant in the best humour.

Having seen the usefulness of a Compact at Roses 2019 (LA1s board) operated by Jacob Dicker its worth was proven and it will likely become our normal OB board from now on. Like the Producer, a flight carry case was bought for it at the same time as buying the board in order to protect it.

The input controls are on the left side of the board and consist of several layers of channels in groups of 8. The board (as it's name should suggest) has 32 channels of audio input, 16 of them are physical XLR inputs (on the back of the board) which are represented by 2 layers of the input side.

The remaining 16 channels can be assigned as stage boxes via AES50 or from another Behringer board. The other layers are for AUX channels and effects returns.

The outputs and mix busses are on the right side of the board, again arranged in the same layered way and with the master fader to their right. Above the inputs is the EQ section, where the input signals can be adjusted, gates and compressors can be put on and phantom power assigned. see the microphone information page for when and where to use phantom power.

Above the output fader bank is the screen, where all the internal control of the desk can be operated. The routing and the visual display of the EQ can also be seen on the screen. Also above each fader is it's scribble strip. These are powerful and really useful, see below.

The studio outputs are a bit different to normal OB outputs since the output passes through 2 independent amps 1 for the control room and one for the studio. For a stream, we would normally use an LR XLR pair out into the ATEM through it's breakout cable. Although, it should be noted here that the Compact really has no reason to be used in the studio other than if the Producer breaks. 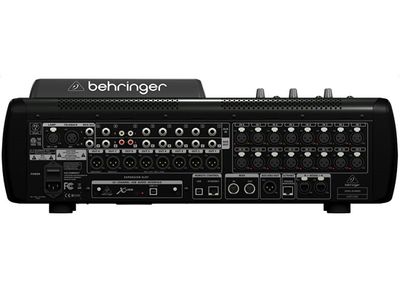 One of the biggest reasons we bought this specific board, is it's internal set of scribble strips. These are basically a fancy term for light-up writable labels which sit above the faders and allow operators to give them a name and a symbol for the sake of identification. This can be super useful when things go wrong (they do a lot) or when setting up a complex or larger scale rig.

They're easy to use, use the inbuilt screen to navigate to the correct scribble strips tab where you can set a colour, name and symbol for every input and output layer. These should also update with scene changes.

The X32 also has an internal effects generator, which we kind of don't use but probably should. There's a bunch of decent effects, mainly reverb and delays that would be good for music performances. Or for messing with people when they're listening to the feedback. Your choice.

Both the Producer and the Compact come with the ability to group multiple channels together for ease of use. To group channels;

This allows for multiple feeds to be represented by 1 fader, making setups with multiple microphones which have to come on at the same time or go off at the same time simpler to manage. However, this only applies when the output feed can be at a uniform gain irrespective of the input volume gain. This makes it better for use when the group of sources is going to have roughly the same volume and levels throughout.

Using the same principle, a number of feeds can be represented on a single bus fader which is then sent to the output mix using sends on fader. They vary from groups in that they can output a varying grain mix, so the main output levels for the grouped signals can be different to the output of the bus. This allows for the bus to send a signal to a stage box or other monitor at a different level across the mix compared to the main LR output of the board.