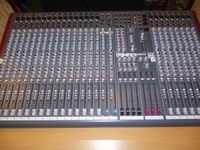 The Allen and Heath ZED 428

The ZED 428 is a 28 channel (24 mono + 4 stereo) analogue mixing desk with 4 groups, 6 auxilary (aux) outputs, 2 matrices, and left, right and mono outputs (LRM). This is the main audio desk used in the studio. The power switch can be found by reaching down the back right of the mixer. It's round.

The Allen and Heath desk was used widely upto the investment, in 2018, of YSTV in a Behringer X32 Producer. As such, the desk has remained fairly unused since.

Being the biggest, newest, shiniest audio desk we have, it is naturally used as our studio desk. Typically, two compressors are connected to the L+R outputs, with more compressors inserted into each microphone channel using the helpfully named 'INSERT' sockets. The matrices outputs feed the control room amplifier, and any two of auxes 3-6 can be used to feed the studio amp if 3+4 are switched to post-fader. PiVT (magic video box), the edit desk, the Mac, and whatever else we happen to be using to play URY on are usually connected to the desk in stereo - either through a stereo channel (blue fader) or a pair of mono channels with their "pan" knobs turned fully left and fully right.

This desk is often used for the larger OBs, mainly due to the unavailability of other mixers in the station. To aid in this (and to increase the life of the desk) there is a flight case for it. Please use it. In addition, the Technical Director must be informed if this desk is leaving the station for any reason.

With the acquisition in 2019 of a second Behringer X32, this one a compact version, the Allen and Heath has a limited use case. It has been used for backup purposes at times where both other desks are in use and a third is required. The most common time this occurs is the annual Roses competition where the Allen and Heath has been used as a studio desk to allow editing PC's to be mixed and managed without tying up smaller and more modern digital desks.

Despite this, the Allen and Heath remains functional and stored for situations which may arise where it is required as a backup desk.

There is a USB-B port located on the desk. Without other software on the connected computer, the desk is configured as a recording/listening device - allowing for recording from the desk or playing out to the desk (possibly at the same time). Other options are possibly available with the right software, such as using the USB as an FX send/return, but this has yet to be tried.

Included with the desk was a copy of Steinberg's Wavelab LE 7 - the CD should be in the technical pigeon-hole.

Other desks on campus

BandSoc also has one of these desks, which we have borrowed on occasion (Woodstock 2013).