The plans for this were largely the same as the plans for the previous year, partly due to the thoroughness of those plans. There were a number of minor changes however. URY's desk was replaced with a borrowed ZED 428 from bandsoc, fed with 24 channels sent through bandsocs borrowed multicore from JSS' stage block. Two 3' x 6' on 1' legs were also hired from JSS for the indoor stage cameras. The decision was also taken to run the indoor stage cameras on their own BNC cables instead of through the cat 5 balun and to place a rifle mic in the indoor stage, with a cat 5 cable was also run as a backup. URY also agreed to loan us a ludicrously long coax reel to help with our cabling runs. Another minor difference was to loop the video feeds through the mux instead of through the monitors.

In the week leading up to Woodstock, the technical team decided they would attempt to prepare the entire vision path for both stages in the studio. This worked reasonably well, with many issues discovered and solved before rigging started on the Friday. One of these was the discovery of various odd interference patterns caused by the mux on certain channels. This was solved by changing channels until all the feeds were clear from problems. The indoor stage vision and audio paths were also placed and wired into an OB trolley, freeing up time to work on the main stage on the day. 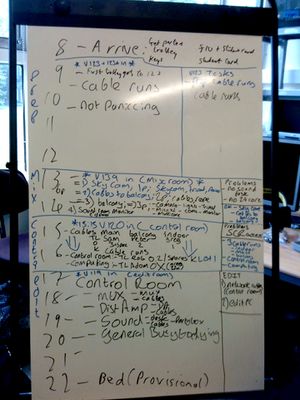 The quickly-drawn up plan for rigging Woodstock 2013 in less than one day. This schedule is for the Friday; in previous years we've started on Wednesday.

Due to issues with booking rooms, access to various rooms was restricted until the afternoon. Despite this, rigging went reasonably well on Friday with few issues.

For the main stage cable run, a long length of rope was stretched out of the control room to the bridge at the bottom of the covered area and back again. The ends of the cables were then attached onto the rope, and the cables pulled along the covered area. The cables were also taped together just before they went through the window to help with the de-rig. This method greatly reduced the time required for the run, with the longest hold-up caused by a Cat5 cable running out unexpectedly before the run was finished. A coupler, spare reel and lots of tape quickly solved that issue.

The indoor and URY runs were accomplished in a similar way - a length of rope was stretched between the control room and the balcony. This was then used to pull the cables across (without dropping them on the heads of the public) to members of URY who then split the cables into the ones going to them and the rest for the indoor stage.

For the indoor stage, we managed to get two 8'x4' staging platforms from JSS, to put tripods and camera ops on. Laid parallel to the room, they fit a tripod on one half and the operator on the other - the raised vantage point gives the cameras a better view over the crowd and prevents the audience crowding them or damaging the equipment, a major problem at Woodstock 2012.

The Saturday morning was mainly occupied with setting up the cameras and running BandSoc's multicore from the stage. As the mix room was directly above FoH, the multicore followed JSS' cable run (mostly) from the stage to FoH and then up a pillar to the mix room. Due to a slight miss-calculation of how long the cable was, YSTV provided great entertainment for both TSS and JSS by trying to get the cable over the top of a tree to get more slack in the run.

For the first time ever we used a Raspberry Pi as a stream drain, taped to the back of the ceiling monitors outside V-Bar. This worked surprisingly well, and saved having to put an entire PC behind the bar door.

We hired a jib from Procam North, just like Woodstock 2012. This has limited effectiveness without a remote screen for the operator to be able to see their own shot, and also doesn't have much reach in the location we put it.