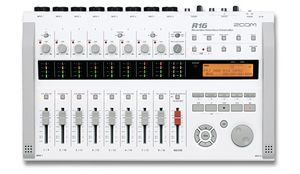 The recorder from the front.

The Zoom R16 is a portable solid-state audio recorder and mixer. It is commonly used for recording YSTV's OBs. While it can take a simple stereo input (by linking channels 1 and 2) for basic recording, it can also be used to record up to 8 channels of submix for later mastering, to 16/24-bit 44.1kHz WAV. It records to an SD card which is formatted in FAT32 - so has a 4GB file size limit, which becomes a problem when stereo recordings are longer than about 3 hours (in 16-bit mode). This must be taken into account on long OBs like Woodstock or Elections.

It accepts XLR and 1/4" jack (balanced or unbalanced) inputs, and has an onboard stereo microphone array. USB cables can be used to daisychain it with another one to make a single 16-channel mixer/recorder. The USB connection also provides power, to phones or LED lights for example. It can be powered from AA batteries. 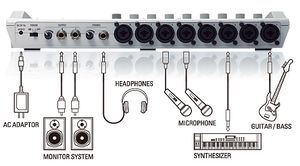 Connectors for audio input and output.