Children in Need 2012 went out live at 20:00 on the dot on 17 November 2012 (Saturday wk6), the day after the BBC's live event. It will long be remembered as one of the most successful and stress-free OBs in YSTV living memory (despite not technically being an OB). It may also be the only live OB in recent memory to have had a rehearsal well before transmission - it actually had two!

Produced by Emma Bew, the show was originally planned to take place in the Roger Kirk Centre (James College) in a similar manner to Children in Need 2011. However, several acts and societies that were meant to perform pulled out at the last minute. This led to the decision being made (in a tense nearly-full committee meeting at 84 Thief Lane), with less than 48 hours to go, to relocate the show to the YSTV Studio and redesign it accordingly. This was the best decision made on an OB in a long time. The techies rejoiced as it meant nothing had to be disassembled, carted about and reassembled twice in two days!

Though the vision and audio paths were pretty much built earlier in the term for TUC and remained in place, very little technical setup was done until the morning of the show. The techies and keen people turned up at approximately 09:30 - raising the set boards, moving and gelling the lights, laying the umbilicals and associated cables, bodging Wedge (comms) into place, fighting with the CORIOgen and setting up mics for an open mic set. The set boards were covered in cut out circles of sugar paper of varying sizes (by Emma, Chris Wall, Liz Pascoe and others) with set and lighting design by Greg Ebdon, John Caine and Robert Walker. 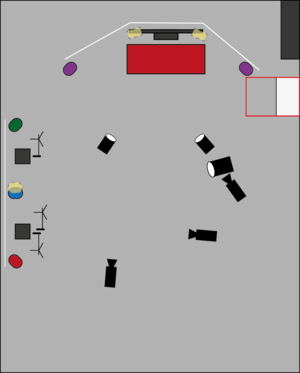 A rough diagram of the floor layout with lights, cameras, seats, sofa, plasma and mic stands. The fire escape is in the upper right (red safety square).

Along the back of the studio and slightly into the fire-door corner was the presenter section - three free-standing white set boards heavily weighted in a slight crescent. These were lit by two cyc fills from the grid down at an oblique angle with yellow gel. Two PAR cans were positioned on the floor at the edges of the boards pointing inwards and upwards at ~45 degrees, with light purple gels and grelco'd together through the 13A two-channel dimmer on circuit 4. Two ex-AV Services rod-operable Fresnels provided front illumination from the grid of the YSTV sofa, with a (lowered) plasma screen between it and the set boards (tapped off the VT DA channel - a dancing Pudsey logo was fashioned in After Effects by Alex Williams to fill the space). The presenters (Linden Feng and Fenella Woodhouse) were mic'd with Lavaliers (lapel mics), with a Sennheiser handheld mic hidden behind the sofa for a centrally-seated guest. Comms to the presenters was via walkie-talkies with earphones, after Wedge comms semi-failed.

Two further white set boards were leant against the control room wall, lit by a single large old Fresnel from the grid across the room, and four PAR cans - one gelled yellow angled from the grid down the middle of the boards, and three gelled red, blue and green pointing up and inwards from the edges and centre of the board on the floor. Two SM58s and an SM57 (for guitar) were used in front of two stools for the open mic set. The relative positioning of the two sets meant that three cameras positioned in a crescent between them could capture a range of angles of both sets just by panning.

Some technology had to be bodged to work - after some suspect soldering the use of tally (Roxanne) had to be abandoned, and the CORIOgen Eclipse was resurrected at the last moment by John Caine after the phono video in/outputs were found to be intermittent and were resoldered. This temporarily dislodged the fade button on the front - with 10 minutes until transmission, it was locked on fade-up mode and gaffed to the desk. Due to Graphics PC's black wallpaper and a bit of creative PowerPointing, nobody should have noticed the difference.

The show went out with minimal stress, bang on time - with enough time for a 20 minute pizza break less than an hour before transmission. Despite the last-minute change of location from the Roger Kirk into the hot studio, a substantial audience turned up and stood at the back of the room, enjoying the show and providing applause. The show was directed by Marie Mills, and everything was kept together well - the movement of acts through the studio was coordinated, and largely due to Emma's meticulous and professional running order, everything went predictably. Robert's messing with the compressors and audio path resulted in beautiful rendering of the music through the audio path to net, and the cameras were well manned and mixed. A series of VTs (largely made earlier the same day...) including a presenter challenge (unprepared presenters had to get the most hugs around campus in a limited time) and an edition of Supermarket Sweep made in the Market Square Costcutter before it opened for business that morning, were played giving a relaxed break for all concerned and allowing for a changeover of crew half way through the show as Best Broadcaster 2012 was unashamedly played through.

The de-rig (which wasn't full, as all control room-side equipment and the presenter set boards were kept for imminent future use) was done in record time due to a high number of crew remaining behind. The entire society was out of the building and locked up by 23:30! The live show was all capture to edit 1 straight out of the DAs and placed in Pending Edits ready for on-demand editing.