Held in the Autumn term of the 2009/2010 academic year, York Come Dancing is Dancesport's rip-off of the BBC's Strictly Come Dancing show.

Throughout the term YSTV produced weekly "round up" shows of the rehearsals that went on that week. Finally on Sunday Week 8, YSTV broadcast the finals live from Central Hall.

With any luck, what you are about to read will enable you to replicate this setup with very little difficulty. 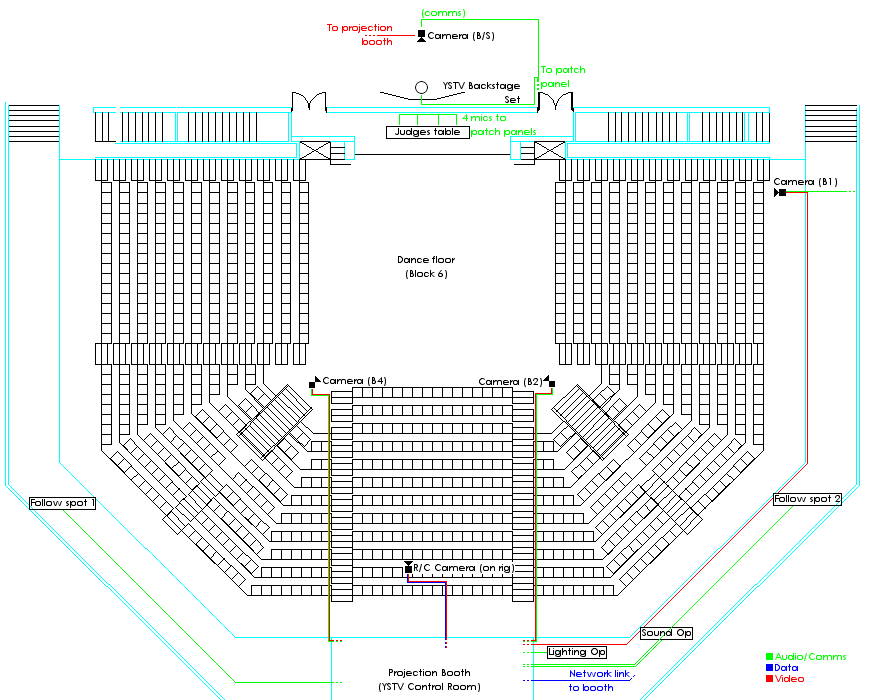 In terms of patching we will have all five Camera sources (B1, B2, B4, Howard, B/S), plus VT PC going into DaVE P169, which will in turn feed DaVE. P169 Control Laptop in conjunction will provide a Touchscreen interface to the P169. There will be preview monitors for all sources (six screens), as well as DaVE 1-4, DaVE out, and DaVE preview.

The output from DaVE will be hit with Coriogen/Graphics PC, becoming our main output. This will be DA'd as follows:

Audio equipment will be mostly provided by AV.

There will be a series of lapel mics for the judges (four), plus at one wireless mic for the "Brucie" Presenter (Luke).

Additionally, the backstage "Tess" presenter (Fionna) will have a wireless mic, plus a mic or two for interviewees. This will require AV's "Gig rig" backstage as the installed wireless mics don't reach the backstage area (the screen has a metal mesh behind it). If the gig rig isn't available or it all falls to pieces, we can fall back to wired mics for the backstage set.

Audio will also come from VT PC for VT playback, plus some music source (CD player?) for the dancers.

All audio will be mixed using AV's Sound desk.

The primary audio mix will be for the Central Hall PA, with a subgroup being mixed and routed to our streaming and capture setups in the Projection Booth.

Don't forget to switch off the hearing loop, or you'll get interference happening every which way possible.

Since we can't really setup anything other than what's going to the balcony, we should probably take stuff in the following order (ish):

At this point we should have enough stuff to start setting up in the balcony area. Long cable runs should be started, but can't really leave the balcony due to there being an event in Central Hall on Saturday. We should attempt to get as much of the sound setup completed as possible at this point also.

Note: Cable runs to the cameras can be completed on the Friday so long as they don't get in the way of the audience (which they shouldn't anyway).

On the Day of the Event, Sunday Week 8, we'll be setting up from about 12 and will require the following additional equipment in this rough order:

Again, at this point we should be ready to finish off the long cable runs and get Cameras up and running and tested. We also need to finish off the sound setup and get the monitors/mics tested and setup correctly.

Finally, we should aim to have as much completed as possible (sound must be completed) by the time Rehearsals start at 3pm ish since we will be operating Follow Spots and Sound output for the event.

I know, everyone's favourite word. Unfortunately working in Central Hall is not the simplest task in the world and a few things need to be adhered to.

First of all, access to the Balcony is only allowed with a member of Audio-Visual staff present. There is no bending this rule. If there's no technician, there's no access, period. AV time is free for 12 hours, then charged £35/hour after that. This will come out of Dancesport's budget, so use the time wisely.

The Balcony is Serious Business. Really. There's some very dodgy pipes extruding from the floor and ceiling as you make your way around, and it's more than likely you'll hit your head if you don't look where you're going. In addition, the lighting hanging from the lower gantry gets very hot, and should not be touched when in operation (or afterwards, for that matter). On no account should ANYONE walk onto the gantry without a full harness and the direct supervision of AV.

If the worst happens and you do get burnt from one of the lights, there are sinks in the changing rooms and toilets on the second floor. Hold the burn under cold running water for at least 10 minutes; no ifs, no buts.

The Projection Booth is not very large, and with four crew plus our video setup it's going to get a bit cozy (not to mention boiling hot). For this reason, crew should avoid loitering on the Balcony area, especially during the show.

Obviously, all our cable runs should be as safe as possible, as they will go directly through the audience seating areas.

The rehearsal room on the 2cd floor is a disabled access route, and needs to have a clear access route from the lift to both sets of double doors. Bear this in mind when setting up preview in said room.

The seating from block 6 is traditionally shoved backstage when not in use, we may need to relocate some of this to the area behind the screen so we have room to make a set.