The Tom trolley, also known as the Outside broadcast trolley or OB-1, is YSTV's single-unit system for capture and live streaming of shows outside the studio. It is a pre-built system designed to be wheeled to a location and set up within an hour for broadcast to our network.

Unfortunately, due to the Panasonic Max being a little less reliable than is ideal, the OB Trolley is now just a trolley in a sad corner of the control room. This article will stay here for the time being, and when the techies have rebuilt it with some of our other equipment, it will be back in business again.

Setting up the trolley requires moderate technical knowledge, though nothing beyond what a competent technical assistant should know already. The most involved part of the setup is likely to be sound, as there is no standard audio configuration (though there are some common ones). In total setup should not take more than around 90 minutes, depending on the size of the event and number of crew.

This section is divided into three lists: "Essential", "Useful" and "Optional". Should be fairly obvious what these mean.

Inputs on the back panel are:

Outputs on the DA are:

The XLR cables have adapters on the end because the sound desk does not have XLR output.

When using sound, it seems that the trolley has no head room whatsoever, so you'll want the audio to peak at -2 or so because peaking at 0 distorts slightly.

Streaming and Capture is performed on the attached OB PC. It should power on auto-magically when the whole trolly gets power. Make sure the network cable (if needed) is connected before you turn it on otherwise you'll run into problems if you plan to do streaming.

When the PC is fully booted you should be presented with a desktop that looks somewhat like this:

... If you don't, then something has gone wrong and you should find a techie :| 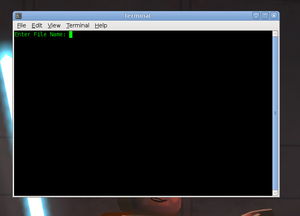 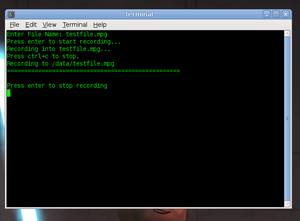 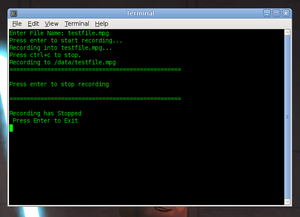 Capture is started by double clicking the big red record button. This will bring up a terminal window with some instructions for you to follow.

Step 1: Enter in the filename you want the video to be saved as and press enter. This should include the extension of .mpg. The file will be saved in the /data/ directory on the machine.

Step 2: You'll be prompted again to 'press enter' when you're ready to start recording. It would be a good idea to do this just before you need to start recording so you don't miss the beginning of whatever you are filming.

Step 3: Leave it running for the duration of the event, and then press enter to stop recording. Finally, you'll be prompted to press enter again to exit the terminal window. 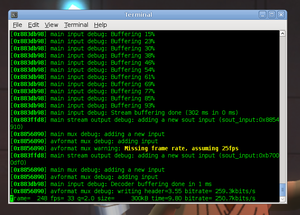 Streaming is a little more involved than capture since it invovles some networking know-how. If you plan to stream it live using our stream servers you also need to talk nicely to the computing team so they can change the streamer configs. In special cases the computing team may be willing to teach someone else how to do it and give them the required priviledges.

Assuming you're still reading and able to stream, here are the rest of the instructions.

Step 1: Find out, and make a note of, the IP address of the OB PC. It is currently set to Roam on CompServs network, so as long as it is connected to a 'normal' compserv network port it should be an IP address in the 144.32.*.* range. If it doesn't, then you definately need a member of the computing team.

Step 2: Double click the big blue 'Stream' button on the desktop. If all goes well you should see something that looks like the image to the right. Notice the output from ffmpeg at the bottom of the window. This should be continuously changing and the fps value should be about 25 (one above or below is ok, but signifcantly less is bad).

Step 3a: If you're streaming to somewhere other than our live stream, then simply point your player (or whatever other receiver of stream) to http://<IP_of_OBPC>:8080/stream.flv. Note that this will only work on campus.

Step 3b: If you're streaming to YSTV stream servers (and have the required privs) you need to modify /usr/local/bin/runobhighqstream.sh on ystvstrm0 and change the IP address to be the IP of the OB PC. Save and exit. Then, you need to stop the normal webstream (by issuing /etc/init.d/webstream stop) and then start the ob webstream (by issuing /etc/init.d/obwebstream start). Do this as soon as you want to 'Cut to Net'. Make sure you don't try to have both streams at the same time otherwise bad stuff will happen, and make sure you stop the obwebstream and start the normal webstream when you're finnished.

Getting your recorded footage

When capturing, your footage is stored in the /data/ directory. To get the footage off once you've made it back to ystv you should follow these steps.

Step 1: Connect the OB PC to the network in YSTV by plugging into port 4 on the well between the edit PC monitors. If this doesn't work, connect a cable durectly into the 48Port switch at the top of the server rack. Then power on the trolly and PC

Step 2: Copy the data over the network to ystvfsrv using scp. Do this by getting a terminal window up (Applications -> Accsessories -> Terminal) and issue this command: scp /data/<your_file_name> user.name@ystvfsrv:/data/UserData/Shows/<Event_Name>/ and press enter. Obviously replace filenames and folder names as appropriate.

The <Event_Name> folder will need to have been created on ystvfsrv already (you can do this on an Edit PC, or via ssh if you like). Also replace 'user.name' with you're ystv username (must be a firstname.surname style user). When you press enter you'll be prompted for your password, and assuming you get it correct, the copying shall commence.

Step 3: Bask in your glory as you watch back your footage on an Edit PC...

If you're used to mixing on DaVE then the Panasonic Max might be a bit of a culture shock. Unlike DaVE it is a hardware mixer, which means the T-bar position will change which buttons you need to use. Thankfully this is relatively obvious: use the bottom row when the T-bar is lowered, and the top row when it is raised.

You may well experience a slight jutter when cutting between two inputs on this desk. There is an "auto-take" button located to the right of the T-bar, which will give you a much smoother transition when used. Simply set the duration knob (just above auto-take) all the way to minimum to do a cut, and put it about 1/4 way up for a fade (mix). The duration knob only affects auto-take, it has no effect on the T-bar.

Note: This section also applies to any other laptop used, e.g. for music, during the event.

Almost all laptops, when plugged into the mains and wired directly to the sound desk, will suffer from interference. There are a couple of workarounds to solve this:

Hoping some more sound-engineery types can expand on this section a bit.

For V/045 and other similar lecture theatres (P/X/001, L/N/028 etc.), a cardioid microphone (e.g. SM58, Sennheiser Evo 825) pointed at each table is usually sufficient to pick up everyone sat at that table. You may also want a separate mic for the lectern if that is to be used. Alternatively, you may choose to simply wire everyone up with a separate tie microphone, though this assumes they won't be moving around during the show.

Central Hall has its own sound system installed, however all its equipment is located on the balcony. Liaison with AV will be required beforehand to get sound inputs diverted to somewhere more useful for us, this may also require liaison with the society putting on the event.