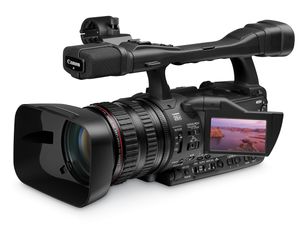 The Canon XH A1s is a former FilmSoc camera, bought by the society sometime in 2009. Following the failure of FilmSoc to re-ratify in 2014, the camera was kept by YUSU for the purposes of filming meetings and events. Like the Sony HVR-HD1000E cameras, it records at 1440x1080i50 (anamorphic) onto HDV tape for capture, and does live video out over a 'proprietary' component connector (HD/SD) or a BNC composite connector (SD).

Due to lack of usage, lack of accessories (no tapes, no charger - both of which we have many of), and the fact that we'd be asking to borrow it a lot anyway, the camera was later given to YSTV to look after. In return, we get to use the camera whenever YUSU don't need it (which is pretty much 99% of the time) - making it a third usable HD camera for pre-recorded shoots. Currently, this is an informal agreement in place between YSTV and Student Activities Officer (and ex-Station Director) Chris Wall.

In December 2014, one of the internal fuses blew when a firewire cable was connected to the camera for capture, causing a short for some reason. Apparently, this is a common problem. The camera is currently unusable, pending replacement of components. 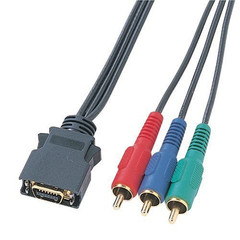 For HD output, the breakout cable could be connected to the connector labeled 'HD/SD Component' (the viewfinder output is SD and dirty). Use the Blackmagic Analogue to SDI converter to change this to a single SDI output, which can then be run through the rest of the vision path.